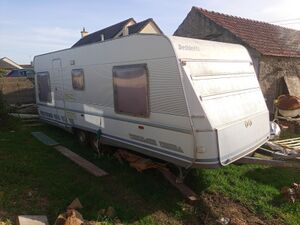 This is the bigger caravan, Dethleffs Rondo 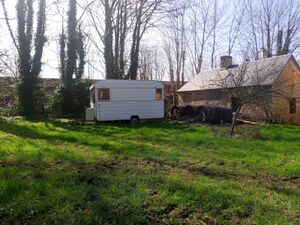 And the little one from seventies, that one was my base till now

The summer is slowly fading away and well as it seems to be quite an old habit autumn should come. Of course based on my cider experience from previous years it may be summer changing nearly directly into winter but lets hope it won't. In around four or five weeks so end of September or beginning of October the cider season for Cidrerie Jara starts, highest time for preparations. As every year of course harvesting and transformation of apples is number one aim. Still they don't pick, crash and juice themselves so having some company and help during those two months would be nice. However the conditions for helpers needs to be improved, last year ones were quite spartan. We would like to build up simple toilets, showers with hot/cold water and pitch a 5x10 m tent, where simple kitchen with eating and hang out area will be set, as much as possible all run on gas. Two caravans, smaller and bigger are already there, the second needs to be bit beautified inside. If we accomplish all above the place should be quite friendly and cozy for visitors. In next week or two clear starting dates for the season 2022 will be set and shared here. If you are considering spending some active but still rather out of stress time in countryside keep an eye open and send an email either to me Algoldor or Cidrerie Jara. Take care and lets hope that we meet during this autumn!