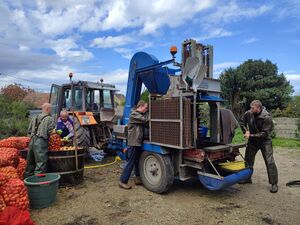 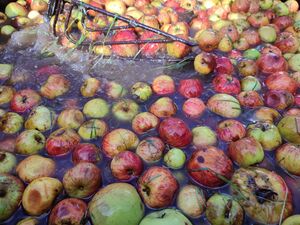 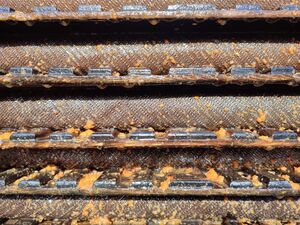 Close up on press 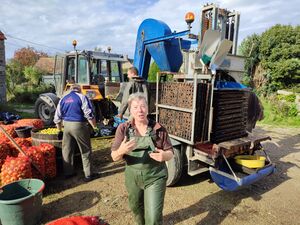 Lydia who helped and did also the photo-documentation 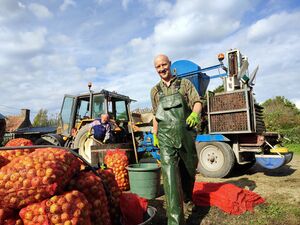 Between the press and cave

End of October is here, time for quick evaluation of the 2022 season how the things went so far. The main "social" happening till now was the first pressing which we did on Sunday 23rd of October. Lydia, Bruno and Hugo were helping out, with Benoît in charge of pressing together with Hugo. We went quite slow, it took us several hours to process 178 of 25 kg bags of apples (around four and half tonnes) resulting in 34 hl (3 400 l) of moût/juice, the density was around 1048. Overall effectivity was 74 to 78% which is very good. We had some nice cheeses from la Cave à Fromage, the ones of you coming to cider events know those, I get my stuff there, it was nice to chat and snack on the breaks. It seems like this season will be rather shorter one, I've already done first passage and preparation of two orchards, first and last passage of another two, leaving just one orchard to do first and maybe last time. In general there are not too many apples this year which because of low budget for the season is not such an issue. What is far worse are the temperatures, 18 to 20°C at eight o'clock in the evening at the end of October is absolute killer for cider making. During the first part of the season the cider made is just for distillation but even then. If the temperature doesn't go down during second half of November there will be no cider for bottling again, like in 2021 season (there are thousands of bottles left from 2019 and 2020 so not problem with stocking but it is nice to bottle every year at least a bit). In other words the conditions for cider making are getting harder and harder. Before saying bye and leaving for the orchards again, if some of you want to join, there is still the chance, let me know. Also around 17th of November I'll be visiting shortly Czech Republic being able to sell, deliver and send cider around the country, sending is also fine for Germany and other EU countries. If you would like to have some high quality natural products as Christmas present or for your pleasure, let me know, the price will go up since January! Sincerely from Vale de Saire for Cidrerie Jara, František